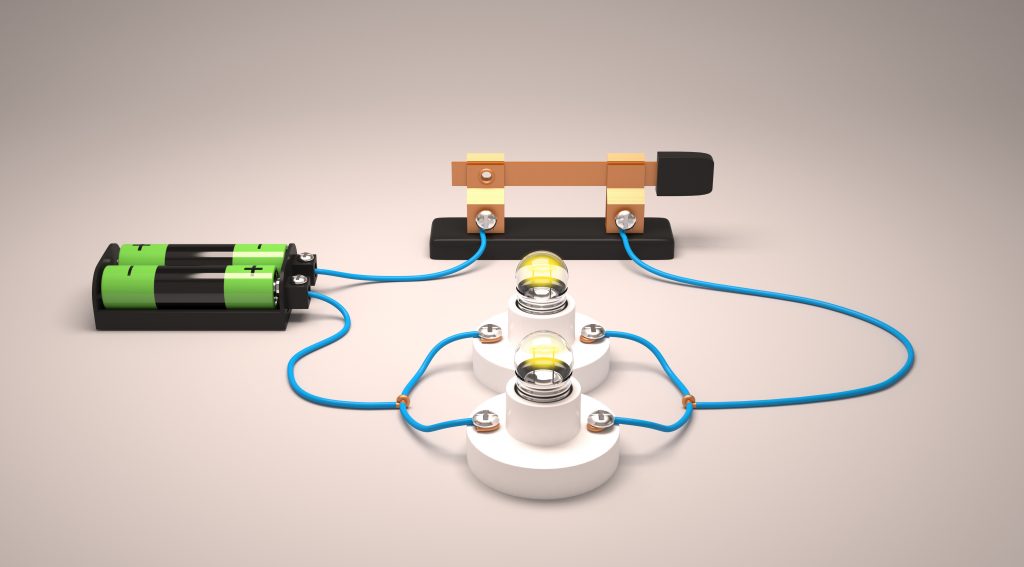 Today I am covering series and parallel circuits. In my last two posts I wrote about charge, current and voltage, and then about resistance. I tried to give a clear picture of what each one is and what it is not. If you have not read those, I suggest reading those first before you go on by clicking on the links above.

So, firstly the difference. How can I tell if I am looking at a series circuit or a parallel circuit?

Well, many of you might be able to tell me that in the pictures above, the one on the left is a parallel circuit and the one on the right is a series circuit. That would be right. But why? You might say that it is because on the left you can see many of the wires are in parallel, but that would be a mistake. Occasionally an exam question might try and catch you out with an oddly drawn circuit like the ones below. (Incidentally, I made this circuit with a very good online electrical circuit simulator which you can find here.) 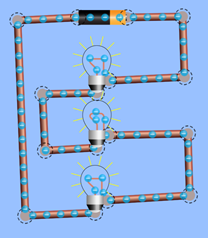 The circuit on the left is actually a series circuit. The reason it is a series circuit is because if you imagine being an electron leaving the battery at the top, you would only have one route to go and you would find yourself going through all 3 of the lightbulbs. The one on the right is a parallel circuit despite no wires being parallel to each other. A parallel circuit has junctions a series circuit does not. A junction is a place where the current can split up. Some of the current goes one way, some goes another. In the two examples of parallel circuits above, an electron would leave a battery and then go through one light bulb. However, they have a choice which one they go through and maybe next time around they’ll go through a different one.

Voltage and current in series and parallel circuits

So, if voltage is the amount of energy per charge then in parallel each electron would have a lot more energy to use up on one lightbulb because they only go through one lightbulb before going

back to the battery to get more energy, whereas in the two series circuits they need to share that energy across all 3 light bulbs before they get back to the battery. You’ll notice that light bulbs in series circuits, therefore, are a lot dimmer than in parallel circuits. Also, if you use a 12 volt battery, the three lightbulbs in series will share the voltage so as they add up.

If you measure the current in a series circuit, you will find it is the same everywhere. It might be a good idea to use the simulation to follow along here and perform your own experiments so as you can see what I mean.

7 WAYS TO GET THE BEST RESULTS FROM PRIVATE TUTORING

Voltage and current in parallel circuits

Using the simulation, have a go at making the circuit below. Do you notice anything about the currents shown in the ammeters A1 to A4? Now try measuring the voltage across each lightbulb 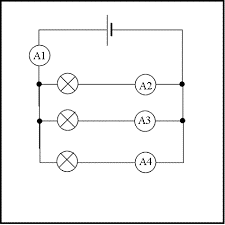 and across the battery.

What you should find is that the voltage across each light bulb is the same as across the battery. This is because each electron uses all of its energy from the battery on that single light bulb and then goes back to get more. You should also find that the current splits up so as if you added up the current in A2, A3 and A4 they would come up the value in A1. This is because current is a measure of how much charge flows by a point per second. Well, the charge was split up at the junctions, and so it makes sense that if you added up A2 to A4 they would give you the value of A1.

Resistors in series and parallel

We know that resistors reduce the amount of current that flows through something. If there is more resistance, the current goes down. More specifically, the resistance in ohms is a measure of what voltage would be required to produce a current of one amp. So, without any more help, see if you can answer these questions:

Most people guess that B has the highest resistance, but then get a bit stuck. This is because they think, ‘Well I can see that 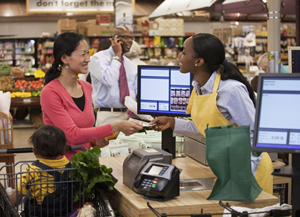 two resistors in parallel wouldn’t be as hard to get through as two in series, but there are still two resistors, so that must have a higher resistance than just one resistor.’ But, think about it in a different way: Imagine the resistor is a checkout counter in a supermarket. Clearly if I opened up another checkout counter (in parallel), it would speed up the flow of customers. In fact, it would double the flow and so would half the resistance

Ok, once again I am over my word limit, so I am afraid I shall have to leave it there. I hope you found it helpful. I think the next post I write is going to be about how we use waves to make sense of the world ‘out there’!