Radioactivity, nuclear decay, radiation… These are terms which are often confused and so I want cover this topic with the main objective of understanding the terms and how they are connected. Let us start by looking at the atom.

The atom and its nucleus 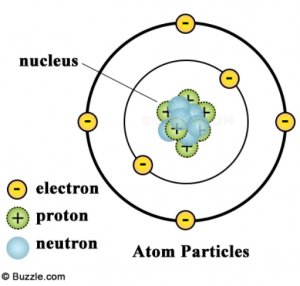 In this picture of an atom, we can see we have protons and neutrons in the centre of the atom, which make up the nucleus and we have electrons around the nucleus. If I was teaching Chemistry right now, I might ask you what element it is in, and where it is in the periodic table. But I’m not (carbon, group 4, period 2). In fact, Chemistry is mostly concerned with the electrons in the atom as they are what is responsible for the chemical reactions it undergoes. Nuclear physics is concerned with… the nucleus of course!

The word atom comes from the Greek word atomos, which means indivisible. In other words, it cannot be divided into smaller bits. It has been theorised for a long time that matter is made out of indivisible particles and we called them atoms for that reason. However, once we found them and gave them the name we annoyingly found that they could be divided into further little particles, which can be called ‘subatomic particles’ and so atoms should really be called something else, but the name stuck.

The above atom is carbon because of its protons, nothing else. If we were to change the amount of neutrons or electrons it would not change the fact that it was carbon. Carbon is, by definition, an atom (or ion) with 6 protons.

This can also be called radioactive decay. If left alone for a long time, (5730 years), there is a 50% chance that it would have changed, as if by magic, into an entirely different atom. It is important to understand here that nothing was done to encourage this. It did not react with anything. Heating up, cooling it down, shaking it or shouting at it will not speed up this process, slow it down or stop it. It can not be predicted when it will happen, only a probability like above can be stated.

Below is something called a nuclear equation of the process.

As you can see, before the decay there is the carbon-14 nucleus and after a nitrogen-14 nucleus. Looking more closely at the carbon 14 nucleus we can see that they have labelled one of the blue circles as a neutron and that same circle on the right is now red and labelled a proton.

A quick look at the periodic table tells us that nitrogen does in fact have 7 protons and this isotope of nitrogen has a mass of 14 and so it must have 7 neutrons. So, during the decay the number of protons went up by 1 and the neutrons went down by 1, leaving the mass number unchanged. Nothing was added to the nucleus and so clearly…

… a neutron changed into a proton??

Yup. That is what happened. Weird right? This type of decay is called beta decay and it is not the only one. There are also alpha decay and gamma decay. If you are studying A-level Physics, this is beta negative decay; there is also beta positive decay.

ISN’T IT AMAZING THAT WE’RE ALIVE? (A BRIEF GUIDE TO ORGAN SYSTEMS)

Ok, so what about these keywords?

So, let’s use this example decay to define the words:

Ok. I hope that is clear enough now. Thanks for reading and I shall see you in the next post! 🙂

Paul is a qualified and experienced Physics, Maths, and Science teacher, now working as a full-time tutor, providing online tuition using a variety of hi-tech resources to provide engaging and interesting lessons.  He covers Physics, Chemistry, Biology, and Science from Prep and Key Stage 3 through to GCSE and IGCSE. He also teaches Physics, Maths, and Chemistry to A-Level across all the major Exam Boards.